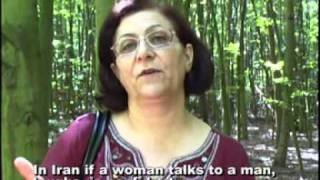 August 12, 2010, Tehran, Iran-An international human rights organization criticized Thursday an interview given by a 43-year-old woman sentenced to death by stoning on Iranian state-run TV a day earlier. Watch this video: In the interview, the woman, Sakineh Mohammadi Ashtiani, denounced her lawyer

In the interview, the woman, Sakineh Mohammadi Ashtiani, denounced her lawyer and said she knew about a plot to kill her husband but felt she had been misled. The mother of two faces a death sentence for adultery.

“Televised ‘confessions’ have repeatedly been used by the authorities to incriminate individuals in custody,” Amnesty International said. “Many have later retracted these ‘confessions,’ stating that they were coerced to make them, sometimes under torture or other ill-treatment.

“This so-called confession forms part of a growing catalog of other forced confessions and self-incriminating statements made by many detainees in the past year.”

The condemned woman’s lawyer, Mohammad Mostafaei, said his client made those comments to state-run television “to save her life” and noted that the death sentence for murder charges related to her husband’s death was commuted.

“The channel that we have in Iran is completely under the control of the intelligence ministry,” Mostafaei told CNN on Thursday. “The goal of this channel is character assassination. And the other goal it has, through the production of documentaries full of lies and people’s confessions, is to justify the government’s illegal actions. This is the case for Sakineh Mohammadi as well. Because right now Sakineh Mohammadi’s life is in the hands of powerful people inside Iran.”

Mostafaei told CNN last month that his client confessed to the crime after being subjected to 99 lashes. He said she later recanted the confession and denied any wrongdoing.

In Wednesday’s interview, aired on the program “20:30,” Ashtiani blamed Mostafaei for publicizing her case and said she had never met him.

“I tell Mostafaei: How dare you use my name, lie in my name, say things about me that are not true,” she said in a statement that was voiced over by another woman. Ashtiani’s voice carries a thick Azeri accent that some Iranians may have difficulty understanding.

She added she had not wanted her family to know she was in jail.

Ashtiani acknowledged having known about the plot to kill her husband but said she had not taken it seriously at the time.

“The man entered my life and fooled me with his words and said let’s kill my husband,” she said. “He fooled me and said I’ll do this for you, what a bad husband, I’ll take care of you. He was my husband’s cousin, and he said things about my husband.

“Then I realized, when I went to prison, he had a criminal record and that this was his third criminal record, and when he said we should kill my husband, I couldn’t even believe him or that my husband would die, I thought he was joking, that he had lost his mind.

“When my husband’s mother was at our house one day and I went to get her medicine, I saw him there with all the tools he had bought, including electrical tools, wires, and gloves. Then he killed my husband by connecting him to electricity with the electrical wires. He had told me beforehand to send my kids to their grandmother’s house.”

The prosecutor of East Azerbaijan Province, Malek Ajdar Sharifi, then says, “The deceased was given an injection to fall asleep by his wife, then the man arrived and put him into the bath and put two electrical lines on his body and killed the deceased.”

The anchor then speculated that the Western news media, including CNN, have focused on the case to help secure the release of three American hikers seized by Iranian forces along the Iraqi border more than a year ago.

Ashtiani’s lawyer dismissed the program as a tool of the government.

” ’20:30′ is a program that is controlled by the intelligence services in Iran,” Mostafaei told CNN in an interview in Oslo, Norway, where he has been granted asylum after fleeing Iran.

He had gone into hiding July 24, after enduring a lengthy interrogation at Iran’s notorious Evin prison, the same day rallies were being held worldwide to draw attention to the Ashtiani case. He then slipped out of the country when his wife and brother-in-law were arrested. They have both since been released.

“Even IRIB [Iranian state television], they don’t have any control of this program,” Mostafaei said. “And the point of having this program is the character assassination of people. In this program, many reports are not real.”

Mostafaei noted that his client is in prison, where she is facing a death sentence.

“It’s natural that she will do whatever the authorities tell her to save her own life,” he said. “They are putting a lot of pressure on her to be on television. Otherwise, it wouldn’t be so crucial to carry out such an act. The lawyer of a person who is facing the death penalty is the person who knows the most information about the case. He is the defending attorney. The lawyer can comment on the case, not the defendant.”

He said Ashtiani’s death sentence for killing her husband had been commuted because the victim’s family forgave her.

“What is important is the sentence to stone this innocent woman to death” for adultery, he said. “She should not be stoned to death. And this is what the international community is demanding as well. This is the main subject that the Iranian state TV broadcast and the judiciary system did not address.”

He disputed the assertion that they had never met. “I met her last year in Tabriz Prison,” he said. “I am her legal counsel. And my goal as her attorney is to help her survive.”

Another of Ashtiani’s lawyers, Hootan Kian, concurred. “She was forced to say these things on television, 100 percent forced,” he told CNN from Tabriz.

“In this case, where there is a courageous man who raises cases, difficult cases which the authorities don’t like, and he sees himself in a position where he has to flee across a mountain. He sees his wife imprisoned. Well, I think we should wake up and speak out,” the foreign minister said.