OCT 21, 2011 – WASHINGTON USA – After almost a decade of war, spending trillions of tax payers dollars for weapon and artillery, U.S. President Barack Obama announced on Friday that the last American soldier would leave Iraq by the end of this year, drawing to a close a divisive eight-year war that cost the lives of more than 4,400 troops, defined the presidency of George W. Bush, and helped ignite his own political rise.

The decision leaves only a vestigial presence of Marine embassy guards and liaison officers staying on where more than a million troops, in all, have served.

The president’s statement, coming a day after a NATO air campaign hastened the death of Col. Muammar el-Qaddafi in Libya, was laden with symbolism, marking the ebb tide of a decade of American military engagement that began after the Sept. 11 terrorist attacks. It also capped a remarkable period of foreign-policy accomplishments for a president who is hindered by a poor economy at home.

For Mr. Obama, whose rise to the White House was based partly on his opposition to the Iraq war but who as president ordered a troop buildup in Afghanistan and intensified drone strikes against militants in the region, the announcement fulfills a campaign promise. Its timing, after Colonel Qaddafi’s death and the commando raid that killed Osama bin Laden, and just as the administration was taking its toughest stance yet on Pakistan’s reluctance to root out militants along its border with Afghanistan, may help insulate him from Republican charges that he is weak on national security.

“Today, I can report that, as promised, the rest of our troops in Iraq will come home by the end of the year,” the president said in a midday appearance at the White House. Anticipating what he called “another season of homecomings,” he declared, “Our troops will definitely be home for the holidays.”

The complete withdrawal, which his political critics decried and his military team had worked hard to avert, was propelled by an irreconcilable dispute between the United States and Iraq over the legal immunity of a small force of military trainers that the Pentagon had planned to leave in the country. Though the president left open the possibility that trainers might still advise Iraqi troops, military officials said the chance of putting any significant American force there was slim.

Watch the Video for full Speech: 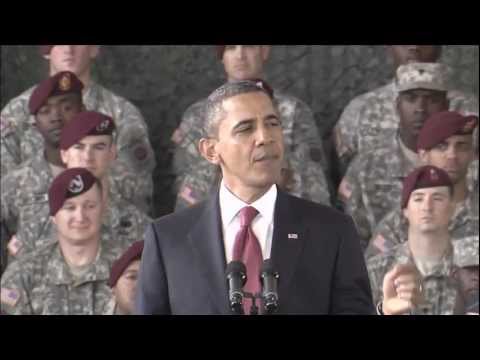 Mitt Romney, the Republican presidential candidate, among others, scorned Mr. Obama for putting the sacrifices of American troops at risk and questioned whether the president had been motivated by “naked political calculation or simply sheer ineptitude in negotiations with the Iraqi government.”

Mr. Obama gave word of the decision to Prime Minister Nuri Kamal al-Maliki, who faces rough political crosswinds of his own over the timing of the departure, in a video conference call. Mr. Obama’s aides described the call as “poignant,” with the Iraqi leader expressing thanks for the sacrifices of American soldiers. As of Jan. 1, 2012, Mr. Obama said, the two countries will begin “a normal relationship between sovereign nations, an equal partnership based on mutual interest and mutual respect.”

The agreement to leave Iraq this year dates from late 2008, when Mr. Bush, before leaving office, made a farewell visit to Baghdad that was disrupted when an Iraqi journalist hurled his shoes at him and denounced him as a “dog.” American military officials had wanted a “residual” force of as many as tens of thousands of soldiers to remain past 2011 as an insurance policy against future violence.

Those numbers were scaled back, but the expectation was that 3,000 to 5,000 American troops would remain. Some top American military officials were dismayed by the decision, saying Mr. Obama was putting the best face on a breakdown in tortured negotiations with the Iraqis.

Pentagon lawyers insisted that the Iraqi Parliament grant soldiers immunity from legal prosecution. In recent weeks, American negotiators in Baghdad concluded that it would be impossible to obtain that protection, essentially scuttling any chance of a substantial troop presence there next year.

Mr. Obama and Defense Secretary Leon E. Panetta kept the door open to further talks on trainers. While civilian and military officials characterized the withdrawal as a clean break, negotiations could always resume.

“As I told Prime Minister Maliki, we will continue discussions on how we might help Iraq train and equip its forces,” Mr. Obama said. “After all, there will be some difficult days ahead for Iraq, and the United States will continue to have an interest in an Iraq that is stable, secure and self-reliant.”

At the Pentagon, however, senior officials said that without a change in the tenor of Iraqi domestic politics, it was unlikely that any enduring American military presence could be negotiated with the Iraqi government.

Instead, these officials said, the two countries might look to create what one Pentagon official called “a smaller footprint and more flexible relationship.” That might include organizing joint exercises, inviting Iraqi officers to American military schools and offering to train Iraqis in other Middle Eastern nations where the United States has a presence.

The United States will still keep about 160 military personnel to guard its embassy in Baghdad and manage the continuing military relationship. There will also be 4,000 to 5,000 private State Department security contractors, as well as a significant C.I.A. presence. In Afghanistan, about 95,000 American troops remain.

“We fought to give Iraqis a choice,” said a frustrated senior officer who was not authorized to speak publicly about the White House’s decision. Another officer said, “Bottom line, it is a failure of the Iraqi government.”

American officials continued to express concern about gaps in Iraq’s security capabilities to withstand what they view as continuing threats of sectarian violence and Iran’s malign influence. But political pressure in Iraq to end the American occupation gradually came to dominate military imperatives.

“Iraq is a highly nationalistic country, and we were not able to dislodge the view that they should not have foreign troops on their soil,” said Christopher R. Hill, a former American ambassador to Iraq who is now dean of the Josef Korbel School of International Studies at the University of Denver.

Mr. Obama’s announcement drew mixed reactions in Washington, with Democrats generally approving while Republicans voiced fears that security gains in Iraq could be reversed without an American presence.

“While I’m concerned that a full withdrawal could jeopardize those gains,” Speaker John A. Boehner said in a statement, “I’m hopeful that both countries will work together to guarantee that a free and democratic Iraq remains a strong and stable partner for the United States in the Middle East.”

News of the American withdrawal was met with scattered celebrations in Iraq. In Sadr City, the Shiite district in Baghdad that is a bastion of anti-American sentiment, roughly 1,000 people celebrated under the picture of young Shiite men who had been killed by American troops.

“The United States here was just like Saddam Hussein,” said Muslim Mohammed, 42, a government employee. “We never thought we’d get rid of Saddam, and we thought his sons would just take over. We thought the Americans would never leave and they would just create excuses to stay longer and longer.”

Mr. Obama, however, has stuck to his plans to end the combat mission and withdraw all troops, in part because he wants to channel energy to reviving the economy. “After a decade of war,” he declared, “the nation that we need to build and the nation that we will build is our own.”