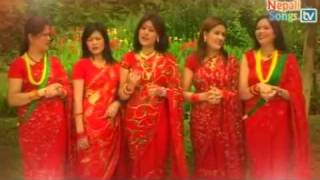 Nepali cultural songs - Nepali Teej Song-Furfur Pari Basi Rachhu Maita Jana Lai, Teej is the well known Hindu festival in Nepal celebrated by married or teen (to be marriage aged) women for their husband's good health and long life. It Describes like this: Teej (Nepali: ???) is a fasting festival fo

Teej is the well known Hindu festival in Nepal celebrated by married or teen (to be marriage aged) women for their husband’s good health and long life.
It Describes like this:
Teej (Nepali: ???) is a fasting festival for Hindu women. It takes place in 3rd day of Shukla Paksha in Shraavan or Saawan month of Hindu calendar, normally falls in the month of August or early September. Dedicated to the Goddess Parvati, commemorating her union with Lord Shiva, the festival is celebrated for marital bliss, well-being of spouse and children and purification of own body and soul. The festival is a three-day-long celebration that combines sumptuous feasts as well as rigid fasting.

The second day is the fasting day. Some women live without a morsel of food and drops of water while others take liquid and fruit. On this day, they gaily dress and visit a near by Shiva temple singing and dancing on the way. The Pashupatinath Temple gets the highest number of devotees. At the Shiva temple, women circumambulate the Shiva Linga, the symbol of the lord, offering flowers, sweets and coins. The main puja (religious ceremony) takes place with offerings of flowers, fruits, etc., made to Shiva and Parbati, beseeching them to grant their blessing upon the husband and family. The important part of the puja is the oil lamp which should be alight throughout the night.