17 April 2019 Dubai – Ahead of big launching of Samsung galaxy fold, its first impressions from VIP’s are surfing around social media. One of the most expensive and latest mobile technology, foldable mobile handset is about to hit the market by end of this week but some of the glimpse can be found on social networks.
In a recent share, one of the UAE’s Crown Prince Sheikh Hamdan bin Mohammed bin Rashid Al Maktoum, Crown Prince of Dubai, shared an Instagram story on Monday that cheered up Samsung users and the company – especially – after he shared his first look at the new flagship phone, the Galaxy Fold.

It’s no hidden secret that the tech-savvy Crown Prince is an Apple fan, from having visited Apple stores in UAE to meeting the tech giant’s CEO, Tim Cook – so sharing this first look of the revolutionary Samsung ‘foldable phablet’ with his 7.8 million followers on Instagram is probably a first for the royal and Android users among his followers.
The South Korean tech giant, apparently, sent out the Galaxy Fold to famous tech vloggers around the world, who were quick to give their followers on social media a first look/impressions of the 7.3-inch phone. 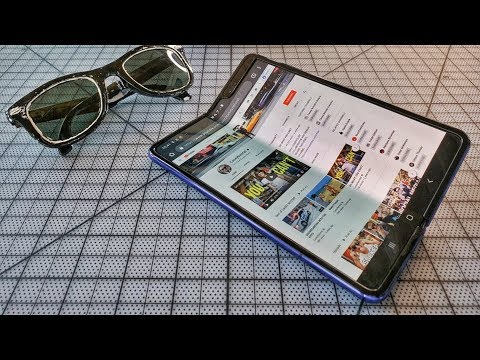 Sheikh Hamdan thanked Samsung for the phone and posted a boomerang video and photo of the gorgeous phablet on Instagram.

The 4.3-inchSamsung Galaxy Fold opens up like a book to reveal a double-sized 7.3-inches screen on the inside.

Retailing at an eye-watering $1,980 (Dh7,300), it is expected the phone may cost a bit higher in the UAE. The phone is set to launch on April 26.
Let’s wait and see what could it be for us to have fold-able Samsung galaxy.