April 15, 2012 Kathmandu –  Have you ever wanted to purchase an iPad? The latest version of a gadget which is faster than your laptop and handy to take where ever you go?  Your dream has come to an end as Apple corporation has lunched its third version of ipad last Month. Its been a month from then, Apple has announced that it has sold more than 10 million pieces of the latest iPad3. What is so special about this tiny but expensive gadget? Let’s find out:

Video at apple store while waiting in the queue: 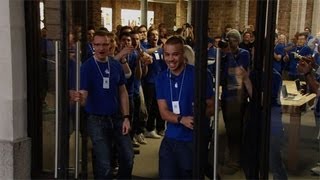 April 15, 2012 Kathmandu -  Have you ever wanted to purchase an iPad? The latest version of a gadget which is faster than your laptop and handy to take where ever you go?  Your dream has come to an end as Apple corporation has lunched its third version of ipad last Month. Its been a month from then,

1. Ultra-high-resolution Retina display
If there is one feature that will get people to upgrade their handheld devices, it’s eye candy. The new iPad has plenty of weight in this category thanks to its new Retina display which doubles the pixel count of the current Apple tablet to an astonishing 2048 x 1536 resolution. In case you don’t feel like doing the math, that’s over a million pixels higher than a 1080p HDTV, and it’s all crammed into a 9.7″ screen.
The new display, while very impressive, isn’t quite as big of a jump as the iPhone 3G was to the iPhone 4, but it retains the Retina namesake nonetheless. For owners of the original Apple tablet as well as the iPad 2, there’s no question that this is one of the most compelling features when considering an upgrade.

2. Apple finally goes for 4G
When the iPhone 4S was revealed in 2011, the lack of 4G LTE support was vexing to many iPhone devotees. Sure, 3G service is speedy compared to a regular cellular connection, but with speeds that rival home broadband, 4G is clearly a mile ahead. With the new iPad, Apple finally jumps in the 4G LTE pool, and tablet junkies should definitely take notice.
With an ecosystem built around apps, social networking, and constant connectivity, the bump up to 4G speeds is a welcome addition. And given that both AT&T and Verizon have invested huge amounts of money in their LTE infrastructure, now is the perfect time to take advantage of it.

3. 5-megapixel iSight lens
Of all the features that Apple added between the original iPad and the iPad 2, none was more of a head scratcher than the rear-facing camera. At less than a megapixel, it didn’t impress anyone, and iPad fans who already had smartphones in their pockets saw little reason for the added camera to even exist.
The new iPad changes things by boasting a 5-megapixel rear-facing lens, 1080p video recording capability, automatic video stabilization, face recognition, and auto-adjusting focus and white balance. Now when you see someone taking a photo with their new iPad, you won’t have a reason to laugh at them.

4. A5X processor adds muscle
The iPad 2 was no slouch in terms of processing power, but the new iPad completely blows it out of the water nonetheless. With the A5X — an upgraded version of the A5 chip found in the iPad 2 and iPhone 4S — Apple’s new tablet boasts four times as much graphics processing might as its predecessor. The added power will be put to good use now that the slate has twice the pixels to render and a whole new world of high-resolution apps and games.

5. Voice dictation is here, even if Siri isn’t
Unfortunately, Apple didn’t see fit to bring the iPhone 4S’s virtual assistant, Siri, to the new iPad. Nevertheless, one of the snarky A.I.’s neatest tricks — the ability to dictate emails and text — has found its way to the new tablet anyway, and fans of barking at their smartphones couldn’t be happier.

A new microphone icon now appears at the bottom of the new iPad’s software keyboard. Once pressed, you can simply talk instead of typing, and the device will do its best to convert your words into on-screen text. It’s a rather cool feature, but just make sure you’re alone when using it, or you may get weird looks from subway patrons as you carry on a conversation with your tablet.
Are you planning on picking up one of Apple’s brand new tablets? If so, what new additions stood out most to you? Let us know in the comments!