MAY 14, 2012 KATHMANDU – Flood in Seti River which was An unprecedented event claimed more than 70 human and countless animals and cattle along with thousands of meters of farmland near by the river bank of seti, A preliminary assessment of the recent flash flood indicates that the river started swelling at a very high point, possibly the glaciated area in the headwaters of the river, unlike earlier claims.

It has been believed so far that the landslide dammed the river which burst out some 25 kilometers away from the Pokhara valley at Machapuchre VDC, causing massive flooding downstream.

Watch the live video taken by mobile camera during the flood: 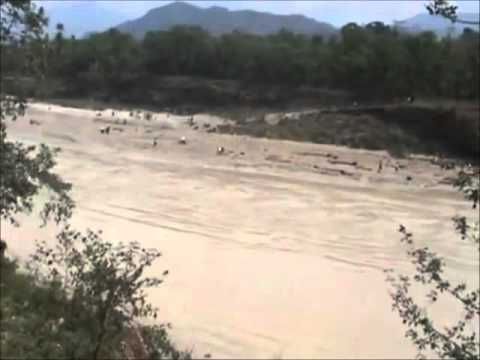 After observing a video footage taken by Nepal Army during its observation flight on May 5, when the incident occurred, a team of government officials and experts from the International Center for Integrated Mountain Development did not agree that a landslide had caused the disaster.

The team on Wednesday traveled to the flood affected area for a preliminary assessment of the source and possible causes.

The information shared by ICIMOD on its website on Saturday says the team noted that in contrast to other flash floods in the mountains, this one did not leave heavy deposits of rock debris along its path. Instead, the team found a heavy deposit of fine sediments. Despite these evidences, the actual source and cause of the flood remains unclear.

Global warming and its cause in the Himalayan icy glaciers melting may have caused the damage as there are no studies on the matter so far.

POKHARA: With two more bodies recovered on Saturday, the death toll triggered by the devastating Seti flash flood in Kaski district has reached 31. According to Police Inspector Rabindra Poudel, six of the bodies are yet to be identified. Forty people are still missing in the flood that swept away riverside settlements on May 5. No one really know the exact number of People missing as the are is popular with tourist and many family have been missing fully.