Uruguay captain Diego Lugano has revealed that he and his team-mates will believe they can win the trophy until someone puts an end to that dream.

The South Americans take on France in their opening Group A match before facing hosts South Africa and Mexico. 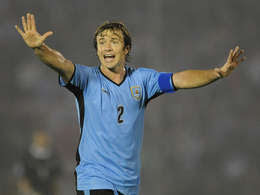 It is only their second World Cup in 20 years but Lugano believes anything can happen, even a third World Cup title.

He said: “Uruguay are going to put up a fight. It’s our dream and personally I believe that until someone beats us and puts us out of the tournament, no-one here will take that from their minds, that we can be world champions.

“Uruguay are not among the favourites because for years now we have not had performances that endorse this favouritism.

“There are six or seven teams who, individually and collectively, are superior to Uruguay, even though these teams could be Brazil, Spain, Italy, Argentina, in one game you can beat them as has already happened many times in the history of Uruguayan football.”

However, their World Cup preparations did not get off to an auspicious start as the plane chartered to take the team to South Africa did not arrive in Montevideo at the scheduled time, meaning they face a five-hour delay at least.

The history can be again  from the Uruguay