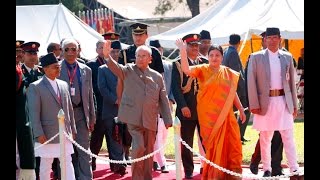 02 November, 2016 Kathmandu  - After 18 years of Gap by a Neighboring President to Visit border-less neighbor has sparked the Himalayan state Nepal as its public sentiment are against Indian policy due to India's interference  over its sovereignty and independence. Leading a 36-member team,  Indian