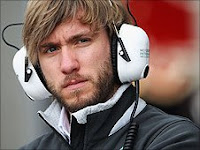 The 33-year-old Heidfeld was test driver for Mercedes at the start of 2010 and has recently been working on tyre development with Pirelli.

“I’m looking forward like crazy to having the opportunity to race again in a good car in Formula 1,” he said.

“After the last months I’m even more motivated than ever. For me it’s like coming home.”

Heidfeld who drove for Sauber from 2001-03 and then again from 2006-09 when the team was run by BMW, will take over for the next race in Singapore and the four following races.

He added: “Without doubt I will be feeling at home straight away and this should help me to familiarise myself as soon as possible with the car. I want to thank Peter Sauber for the faith he has put in me.”

De la Rosa, 39, returned to F1 from a test role with McLaren for the first time since 2006 to satisfy a desire to race again.

But his season has not gone to plan and he has scored only six points to team-mate Kamui Kobayashi’s 21. Kobayashi has already been signed for 2011.

The Spaniard said: “I am surprised by the team’s decision but I respect it and would like to wish everyone good luck for the remainder of the season. I still intend to be in Formula 1 in 2011.

Team principal Peter Sauber said: “It was a hard decision for me to make as a team principal and I want to thank Pedro for his professionalism. By signing Nick we have a driver we know extremely well who will help us to further judge the comparative potential of our car.”

Heidfeld is vastly experienced, having taken part in 169 Formula 1 races, having driven for Prost, Jordan and Williams as well as Sauber. His best result is second place and he holds the record for scoring most points without a win.

He started the season as the test and reserve driver for Mercedes but left the team in August to become the test driver for tyre company Pirelli as it prepares to replace Bridgestone as F1’s supplier in 2011.

He has done two extensive tests for Pirelli, which is well advances in designing its new F1 tyres, and it is understood he has extricated himself from those commitments.