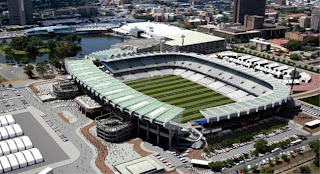 Home to some of the country’s most fanatical group of supporters, the Free State Stadium is likely to be the centre of attention during the FIFA World Cup™. The stadium was given a plush new look for the 2009 FIFA Confederations Cup . It hosted the memorable semi-final match between Spain and USA where the latter secured one of the biggest surprises of the tournament by sending the European champions packing in front of a capacity crowd.

The Free State Stadium was upgraded from a capacity of 38,000 to 45,000 during the refurbishments. The stadium has hosted numerous major football and rugby union matches, and Bloemfontein’s natives are renowned for their passion for sport. While the former played second fiddle to the latter for decades, football’s popularity explosion – aided by the emergence of Bloemfontein Celtic – is changing this. The Celtic fans are known as Siwelele, a Sotho term.