British newspaper The Observer released the undated video showing Jarawa tribal women some of them naked  being lured to dance and sing after a bribe was allegedly paid to a policeman to produce them.

Under Indian laws designed to protect ancient tribal groups susceptible to outside influence and disease, photographing or coming into contact with the Jarawa and some of the Andaman aborigines is banned.

The tribe, thought to have been among the first people to migrate successfully from Africa to Asia, lives a nomadic existence in the lush, tropical forests of the Andamans in the Indian Ocean. 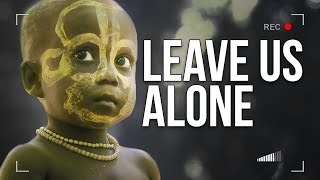 “An inquiry has been ordered and it is being headed by the chief secretary and director-general of police of the Andaman and Nicobar Islands,” Deo told the Press Trust of India news agency.

“It’s deplorable. You cannot treat human beings like beasts for the sake of money. Whatever kind of tourism is that, I totally disapprove of that and it is being banned also,” the minister added.

“Quite clearly, some people’s attitudes towards tribal peoples haven’t moved on a jot. The Jarawa are not circus ponies bound to dance at anyone’s bidding,” said Stephen Corry, the group’s director, in a press release.

But state anthropologist A. Justin, who works on the Andaman islands, questioned whether the scenes were recent.

“Before the 2004 tsunami, people might have forced them to dance and there may have been some much smaller violations since then,” Justin said by telephone from the capital Port Blair.

“Since the tsunami, a policy of maximum autonomy with minimum intervention has been put in place. Things are being taken care of these days. There is a lot of (security) coverage there now.”

Justin said the video appeared to be several years old, while police in Port Blair also suggested it was taken some time ago.

“The video appears to be six to seven years old when Jarawas remained unclothed but now they wear dresses in public,” Director-General of Police Samsher Deol said.

The Observer report said its journalist had recently seen tourists throw bananas and biscuits to tribespeople on the roadside, and had been told by local traders how much to bribe the police to spend a day out with the Jarawa.

The London-based group called for tourists to boycott the road used to enter the reserve of the Jarawa tribe, who number just 403 and are in danger of dying out.

The Andaman and Nicobar tropical island chain is home to four other rare tribes — Onge, the Great Andamanese, the Sentinelese and the Shompens each numbering fewer than 350 members.