November 07, 2011, London UK – As protesters are burning bra and other feminine clothing outside the Earl’s Court in London protesting against the Beauty Pageant, Miss Venezuela crowned Miss World 2011.

Miss Venezuela, Ivian Sarcos, crowned the 61st Miss World at a ceremony in London as protesters gather outside.

When Miss World was held in Britain, in the 1970s, bra-burning feminists stormed the Albert Hall in protest.

Forty years on, demonstrators were kept outside the auditorium and their underwear stayed on but their strength of feeling remained the same.

Inside Earl’s Court in west London yesterday 122 contestants at the annual beauty pageant showed off their figures, boasted of talents and skills, and spoke of their hopes for a better world.

Outside, up to 200 campaigners brandished placards and shouted slogans, determined to show that they were “still here, still angry”.

The Miss World contest has not been broadcast on a major channel in Britain for a decade. But it is watched by more than a billion people worldwide and tickets to the event fetch up to £100.

Sabrina Qureshi, the founder of Million Women Rise, said that, far from harmless fun, beauty pageants were a sign of a society that trivializes women in a way that leads to violence such as the murder of Joanna Yeates. “We have read that the murderer of Joanna Yeates was using pornography which contained images very similar to how he murdered Joanna,” said Ms. Qureshi.

“To stop such heinous crimes against women and girls, we need to stop trivializing what may appear to be harmless practices and start joining up the dots of women’s treatment, representation, and discrimination.”

Protesters from the London Feminist Network, Object, and UK Feminista clearly did not heed the plea of a former Miss World, who last week urged feminists to abandon their planned demonstration.

“Appreciating beauty should not cause anger,” she said,

“Women enter beauty pageants at their own will, they are not forced into it. I don’t understand why feminists think it is degrading, as pageants are actually empowering women.

“Ask any of the contestants. Pageants give the girls confidence and give them opportunities they may not otherwise have had and I can speak from experience.”

Miss World began in 1951 during the Festival of Britain. Angie Beasley, the director of Miss England, insisted that the contest “had changed with the times”.

“Yes they have to look great to win but it’s so much more than a beauty contest. These people should give it a chance instead of thinking it’s just a bikini parade.

“I’m all for women standing up for what they believe in, which is why I run Miss England, but I’m fed up with these protesters trying to bully us and push us around. We live in a free society where women have the right to choose. The contestants in Miss World are quite capable of making up their own minds if they want to enter or not and protesters shouldn’t keep criticizing the same decision. If you don’t like it, don’t watch it.”

Ivan Sarcos, a 21-year-old from Venezuela, was crowned last night at a ceremony that featured entertainment from the street dance group Diversity.

The winner will spend a year visiting and supporting a range of global charity projects supported by Miss World’s Beauty With A Purpose program.

By the time the winner was announced, the protesters had moved off.

Some of the Beauties from Around at the ceremony: Full Program Video. 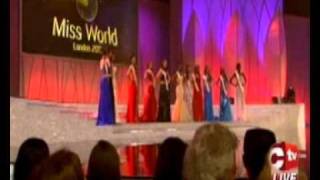