JAN 14, 2012, Kathmandu – Korean Students of Little Angles School in Soul performed in Kathmandu as their tour to Nepal. They mostly sing Nepali songs, National Anthem of Nepal and some Peace songs. 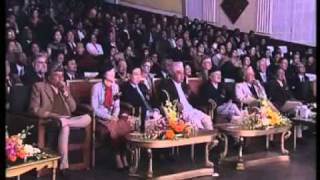 JAN 14, 2012, Kathmandu - Korean Students of Little Angles School in Soul performed in Kathmandu as their tour to Nepal. They mostly sing Nepali songs, National Anthem of Nepal and some Peace songs. They were established in Korea nearly 50 years ago and have visited over 60 nations; nonetheless, the

They were established in Korea nearly 50 years ago and have visited over 60 nations; nonetheless, the recently concluded Little Angels’ tour in Nepal was ‘absolutely unprecedented,’ according to the Chairman of the Korean Cultural Foundation, Dr. Bo Hi Pak.

Thirty-three Little Angels from the Land of the Morning Calm danced and sang their way into the hearts of the Nepalese people in many extraordinary ways: An estimated 12 million Nepalese people saw the first-ever live TV broadcast of the Little Angels’ performance anywhere in the world. The entire two-hour program was telecast live via Nepal Television, the government owned and operated station, which reaches Nepal’s 30 million citizens even in remote villages and, via cable, to 74 nations. Twelve public events were held, and an estimated 12,000 people saw the Little Angels in person. This included 5,200 Nepalese school children who welcomed the Little Angels to Nepal; the two live, sold-out performances February 23 and 24 (the second performance was to an audience more than three times the capacity of the hall); several student-to-student interactions with thousands of Nepalese school children; and exclusive audiences with Nepal’s dignitaries.

“This will certainly be one of the outstanding highlights in our 2011 tourism year,” said former Prime Minister Madhav Kumar Nepal at the closing banquet on February 26. As Prime Minister, he had sent an official letter inviting the Little Angels to Nepal. The event was co-sponsored by the Ministry of Tourism and Civil Aviation, the Korean Cultural Foundation, and UPF–Nepal.

Their precision was breathtaking. In absolute harmony they pounded drums, danced, marched, and sang. The President of Nepal, Dr. Ram Baran Yadav, called them “angels of peace,” and said “These Little Angels sang like flowers … they made us so happy.” But their mission in Nepal was much more than entertainment. The motto for the Nepal Peace Tour and Goodwill Performance was, “Peace, Constitution, and Reconciliation.”

The Chief Guest for the event on February 25 in Pokhara (a tourist city 198 km west of the capital, Kathmandu) was the Minister of Tourism and Civil Aviation, Hon. Sharat Singha Bhandari. He could see how the Little Angels’ tour was connected to Nepal’s ongoing peace process and future development.

“We want to learn from Korea,” he said, “and our mission begins with the Little Angels.” In the audience were four other members of Nepal’s Constituent Assembly. The former Minister saw in these young children, ages 9-15, “a new spirit and vision” for Nepal. It was based on the value of sacrifice—the central component of the mesmerizing performances of the Little Angels.

This spirit, he noted, would not only help the peace process move forward; it could also help Nepal develop economically. With this insight in mind, Hon. Bhandari prefaced his comments by saying, “I want to thank Father Moon (the Founder of the Little Angels) who understood the need of Nepal at this hour” and sent us the Little Angels.

Rt. Hon. Parmanand Jha, the Vice-President of Nepal, visited Korea last year and personally invited Father Moon to Nepal. In his comments before the live TV broadcast the Vice-President stated, “Although Father and Mother Moon could not come this time, they sent us these beautiful ambassadors for peace. This is really the best gift for Nepal at this time.”

The Chairman of the Korean Cultural Foundation shared how Korea developed from the ashes of war into the economic powerhouse it is today. “There was no Saturday or Sunday in the people’s mind,” Dr. Pak explained. He continued by saying, “The Korean week consisted of Monday, Monday, Tuesday, Wednesday, Thursday, Friday, and Friday—but no weekend, no day of rest.”

This spirit of selfless sacrifice was exemplified in the magical artistry of the Little Angels. But few really saw their depth of those sacrifices. During their public performances in Nepal, five of the Korean children fainted back stage. The low ceiling and narrow stage magnified the heat from the lights, but the girls never gave up. Staff and teammates revived the dizzy children and again they came back on stage to the delight of the audience who only saw their beautiful, always-smiling faces. This type of single-minded dedication and willingness to sacrifice for the sake of others changed Korea’s destiny, economy, and image; it is also the spirit that makes the Little Angels so special.

Dr. Pak spoke passionately about his new-found love for Nepal and told Nepalese people they too can find the reconciliation needed to bring the peace process back on track and generate prosperity unparalleled in Asia—if they inherit this kind of altruistic spirit.

Dr. Chung Sik Yong, the Regional President of UPF-Asia and part of the impetus to bring the Little Angels to Nepal, envisions further bilateral relationships between Korea and Nepal through student exchange programs and other educational initiatives.

Cong. Ek Nath Dhakal, President of UPF-Nepal and co-chairman of the organizing committee, expressed his gratitude to the government of Nepal for its generous support. “The Government of Nepal provided Dr. Pak and the Little Angels many special facilities during their stay in Nepal. It made them feel welcomed and they want to come back to Nepal again.”

That’s good because the slogan for Nepal’s 2011 tourism campaign this year is “Once is not enough.”

Please be informed that, this event was held in Kathmandu in February 2o11  and video was there in youtube and other media sites from then. I had just remember the day and posted here to share with you fine people. We don’t hold any rights of this video.