19 JULY 2014 – Abu Dhabi – The greatness and brave wisdom of a leader does reflects in the country or in the community where he or she belong, A deserted land turn into the vibrant nation of prosperity, development and prosperous within the time frame of 40 or less years is a sign of bravery, hard work, respect and united for the future of the Nation.

THE CHARACTER of a great leader can only be grasped when we think of how situations and circumstances could have been handled if he or she was still among us. Shaikh Zayed Bin Sultan Al Nahyan is one such leader who, not only Emiratis but the entire Arab region also, dearly miss.

To begin with, it would have been a taboo that countries are allowed to disintegrate. Shaikh Zayed always believed in the critical role played by major Arab states in the region’s affairs — countries such as Syria, Egypt, or Iraq. These countries are recognized as big contenders due to their strategic location, population and power in the region’s politics. Shaikh Zayed would have called on the importance of nations to remain aligned as a single entity. He would certainly have worked towards helping all parties to overcome their petty divisions — be it political, religious, or sectarian — and unite to work for what is best for their nation and their people.

Unquestionably, he would have been dismayed to witness the break-up of Arab nations one after the other in the manner that it is unfolding today. He would have certainly been appalled at the absence of any sense of responsibility by some factions in the Arab world as well as the animosity by which they are governed. More so by their illogical agenda that aims to destroy rather than build; to divide rather than to unite; and to spill blood rather than instill hope.

Watch the Documentaries about Abu Dhabi and Seikh Zayed Below: 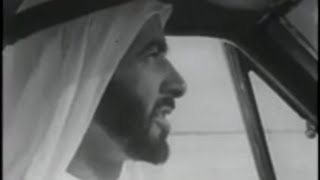 19 JULY 2014 - Abu Dhabi - The greatness and brave wisdom of a leader does reflects in the country or in the community where he or she belong, A deserted land turn into the vibrant nation of prosperity, development and prosperous within the time frame of 40 or less years is a sign of bravery, hard w

Shaikh Zayed worked for the welfare of every Arab nation and its people. He has always emphasized on the importance of governments serving the needs of the people; a policy that he had instilled when the UAE was established, and one that continued to be carried on in the following decades.

He would have been dismayed at how governments today are utilizing all necessary means possible to attack and harm its own citizens. Such mayhem is contrary to his philosophy that efforts should be geared towards building the nation, aspiring to become one amongst the best, and allowing its people to thrive and advance in all walks of life. It was his belief that only by facilitating the tools to excel, would nations advance. This would include assembling a viable infrastructure, guaranteeing education and healthcare, offering job opportunities, and ensuring safety and peace. He was a leader who practiced what he preached.

In order to be able to bring everyone onto the same platform, one should be charismatic to influence others so that to believe in a single identity which rises above all sectarian, tribal, religious, and ethnic allegiances and agendas. Shaikh Zayed was exceptional at this trait as he brought together, on many occasions, parties that were at opposite poles.

Sectarianism of any trait or type did not exist in his dictionary for he believed that people have more that unites them than that which divides them. Revenge, meaningless and chaotic destruction is rejected because he believed that violence breeds violence, and that nations can only be built when they are at peace with each other and not while constantly in conflict. Power, in the world of politics and otherwise, should be a tool that unites people and not divide them, shattering them into fragmented citizens and displaced refugees.

If Shaikh Zayed was amongst us today, he would have been saddened at the state of affairs of the Arab world. For me, personally, I looked upon Shaikh Zayed as a father figure who stood tall and always had faith in the ability of his people. I have never had the fortune to meet him, but yet I always felt connected. This is because of his ability as a leader to link with every single Emirati on a personal level without even having met them.

Ten years on, Shaikh Zayed is missed as a compassionate, wise, fair, reasonable, practical and astute leader, who would have helped in making sense of the chaos this region is facing today, and enabled others to cross the bridge to safety. For all of these traits and a decade after his death, he is still fondly remembered today.

To quote him: “There is no glory without the glory of the country and its citizens. We have to be proud of our forefathers, who were able to face the harshness of life with a strong will and dedication to shape a better collective future.”

This Article was first Published in the Khaleej Times News Paper in the UAE. Published here as a Memoire and to symbolize the greatness of Late H.H. Seikh Zayed Bin Sultan Al Nahyan, Founding Father of the UAE.