JAN 12, 2012 Kathmandu – Tribal groups in the Jungles of Indian sub-continent are common in many parts of the India, Nepal, Bangladesh and Sri Lanka. As Tourism brings the hot dollars to this part of the world, their ethnicity, culture and tradition are in danger as they are offered with food and other bribe to make them happy to show their preserved culture and tradition to the world.
In recent controversial video footage taken by some tourist in Indian island Andaman, the road side dance shows clear exploitation of their rare ethnicity.

Here is the news that broke out by The Observer of UK.

The young woman giggled, looked shy and hopped from foot to foot. The camera swung back to the others who clapped, swayed and jumped.

This kind of video is the trophy tourist’s dream of when they set off into the jungles of the Andaman Islands “on safari”. The beauty of the forest functions merely as a backdrop. The goal of the trip is to seek out the Jarawa, a reclusive tribe only recently contacted, which is taking the first tentative steps towards a relationship with the outside world.
Watch Video Below: 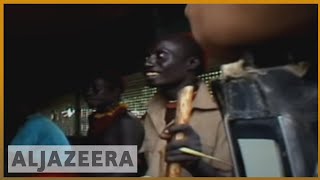 JAN 12, 2012 Kathmandu - Tribal groups in the Jungles of Indian sub-continent are common in many parts of the India, Nepal, Bangladesh and Sri Lanka. As Tourism brings the hot dollars to this part of the world, their ethnicity, culture and tradition are in danger as they are offered with food and ot

The Jarawa tribe is 403-strong. Its members are trusting, innocent and hugely vulnerable to exploitation, living in a jungle reserve on South Andaman. The islands are a spectacular magnet for tourists, set in the Bay of Bengal and belonging to India.

The role of the police is to protect tribal people from unwelcome and intrusive outsiders. But on this occasion the officer had accepted a £200 bribe to get the girls to perform. “I gave you food,” he reminded them at the start of the video.

Every day hundreds of tourist cars line up on the Andaman Trunk Road, which winds through the reserve. Signs at the entrance warn them of the rules; no pictures, no contact, nothing to disturb the tribe members. Most are already struggling to come to grips with the diseases of the outside world which have beset them since they started to make forays out of the jungle 14 years ago.

But, on the day the Observer visited, when the gates opened the cameras immediately started clicking. Tourists threw bananas and biscuits to the tribal people at the roadside, as they would to animals in a safari park.

At the Vyas Brothers shop in Port Blair, capital of the Andaman’s, various Jarawa items were on sale: handicrafts and some small wooden figurines. Rajesh Vyas stood behind the counter. He was happy to lay out the price of a day out with the Jarawa: up to 15,000 rupees (£185) to buy off the police, another 10,000-15,000 rupees on top of that for a car, a driver, gifts for the Jarawa, and biscuits and snacks. Contact is guaranteed, he promised.

It gets light early in the Andaman. By 5.30am a line of about 130 cars and 25 buses stretched back from the entrance to the 1,021 sq km reserve. Vyas had found a driver, Guddu, prepared to carry a passenger who wanted to photograph the Jarawa, regardless of the illegality.

As a slight drizzle fell, the convoy was already quite strung out, the cars a good 50 meters apart. “If you not get picture, I give you. I have video too,” says Guddu.

The car plunged on through the towering jungle. Suddenly Guddu put his foot on the brake: “Take photograph. Take, take, and take.” Ahead of the car, two Jarawa women had stepped out of the forest. One stood in front, the other moved round to the rear passenger window. No police and no security were in evidence. One of the women leaned through the window, arm outstretched. Guddu immediately accelerated away and the women were gone. What had she wanted? Food, said Guddu, or money. Maybe the camera.

The vehicle finally reached the jetty for Baratang, the end of the road. An hour later another convoy headed back. More Jarawa, large groups, men, women and children, were standing and sitting by the roadside. These tribal people were guarded by police, who waved the vehicles on, but it is clear they were there because they know the convoys will come. They are not merely being protected from the tourists; they are being protected from themselves.

Denis Giles is the campaigning editor of the islands’ Andaman Chronicle newspaper. He told the Observer it was principally the young who had come out of the jungle, fascinated by outsiders and what they have to offer. As they grow older, they lose interest, realizing that the outside world is not for them.

“I believe that one fine day the Jarawa will have to come out and mix. They can’t stay in the forest for ever. They are aware that there is a world outside the forest. But it should not be a cultural shock to them; they should choose the pace at which they do it,” he says.

Instead, the tribe is being thrust into ever closer proximity to the tourists and other islanders. They believe the police are protecting them, Giles says, but the reality is that the police are using them. He says the police have taught the Jarawa to beg; the police take the money they collect and in return give them tobacco, which they never previously used, and food. The possibility of abuse is obvious, and Giles says there have been cases where Jarawa women have given birth to children fathered by outsiders. The babies are not accepted by the tribe and are killed, he says.

In an attempt to reduce contact, the authorities have cut the number of convoys to eight a day, but they will not close the road completely – as the Supreme Court ordered in 2002 – because they say too many people rely on it. Instead they are playing for time, apparently uncertain what to do next: shut the Jarawa off from the world for their own good, or allow those who want to make contact to do so?

“They are humans and they are a race which is looking at us and they are at a crossroads and we are not sure what is on their minds,” says Ajai Saxena, secretary of the Andaman Adim Janjati Vikas Samiti, the island administration’s tribal welfare office.

Anthropologists think the Jarawa are descendants of some of the first humans to move out of Africa. Theirs is a simple life. Men hunt pigs and turtles with bows and arrows; women gather fruit and honey. They have no gods and when people die they are left under a tree until only the skeleton remains. Then the tribe tie the bones to their bodies to bring luck during the hunt.

It was only in 1998 that they started to venture out of the jungle in any numbers. Two years earlier a young member of the tribe, Enmai, had broken his leg while raiding a settlement on the edge of the reserve. He was taken to hospital and treated; on his return, he spoke enthusiastically of the outside world. It was enough to convince some in the tribe to drop their traditional hostility towards outsiders. Some began to regard the road as a new place to forage, somewhere they could easily pick up treats.

But that is not all they were picking up. Like many previously non contacted tribes, the Jarawa are vulnerable to unfamiliar diseases. They started succumbing to measles and mumps and even malaria, to which they previously appeared to have some sort of immunity. Some have also adopted the vices of the outsiders: tobacco, alcohol and betel nuts (a mild stimulant).

Those responsible for the tribe’s welfare think the only solution is to keep them apart from outsiders for as long as possible. “Forced coexistence would be total genocide for them,” says Dr Anstice Justin, head of the Anthropological Survey of India in Port Blair. He points to the case of Enmai, who became something of a minor celebrity before his interest waned and he stopped coming out of the jungle. Most of the Jarawa feel that way, Justin says. “The inner core feeling is not to have interaction with outsiders.”

In 2007 the government established a buffer zone around the reserve, hoping to protect the tribe from further interaction with the outside world, in particular a luxury resort being constructed on the very edge of the reserve by the Barefoot India tour company. The company hired lawyers to fight the zone and the case is currently with India’s Supreme Court: in the meantime the resort stands abandoned in a clearing near the shore of Constance Bay, on the west coast of the island. But the safaris go on, four each way, day in, day out, and the police admit they are powerless to prevent some contact between the tribe and the tourists.

“It is not a foolproof arrangement, but we are making the effort,” says SB Tyagi, superintendent of police for South Andaman. “People have to understand that if there is a policy of non-interaction there has to be a list of rules. But still some of the drivers and tourists slow down.”

He admits some officers are breaking the rules. “The moment we come across any misdemeanor on the part of our police officers they are dealt with swiftly,” he says. “The tour operators and police are local, so there may be situations where they look the other way. There may be incidents where our officers are negligent, and we have taken action.”

He cites an incident in which an officer was censured for allowing two bus drivers to take Jarawa girls into the jungle. “Who knows why they wanted to?” he says. “Some people will have the urge to look at Jarawa women as sexual objects. Humans will be humans. One can only try to educate them.”

That particular policeman’s punishment was to have his future promotion delayed by six months.

The human rights group Survival International, which has been campaigning for the Jarawa for nearly 20 years, believes the current situation is precarious.

“The Jarawa could easily be decimated or reduced to a state of dependency, as has happened to so many other tribes worldwide,” says spokeswoman Sophie Grig. Survival argues that closing the road would at least allow the tribe to decide whether it has contact.

Not everyone agrees; the local MP has argued strongly that trying to keep the Jarawa apart is futile. But what everyone wants to avoid is the Jarawa going the way of the Great Andamanese, who once lived around Port Blair. From 10,000 in the late 18th century, their numbers have now fallen to about 50 and the tribe is drifting out of history.

“They lost the will to live,” says Denis Giles. “The government gave them all facilities, it gave them jobs, but they started drinking and begging. They lost their self-respect and their language and their culture. It is easy for politicians to say integrate, but it is not simple to put it into practice.”