In a modern day Pakistan, where purest of Islam is being followed, harsh punishment is written in their law book but some of the behaviors forbidden by Qua-ran and humanity is still publicly practiced in the name of pleasure and influence of money.

What Happens Behind The Standing Buses?

Poverty, joblessness, proper education and moreover lack of governmental institution’s inability is the main cause of flourishing such inhumane activities in and around the world.

Being subjected to barbarianism stripping their childhood away from them, child prostitutes at the infamous Pirwadhai are forced to sell their nights in as low as 250 rupees. The young boys stand in the horrifying setting waiting to be chosen and later being subjected to brutality.
Aged mostly between 8 to 14 years old, these young boys are rented out in the secluded area by the inhumane individual that they refer to as ‘’bhais’’.

These individuals recognize the power they have over these innocent souls well as most of them belong to other cities who reached there in search of better livelihood. Helpless, stranded in an unknown atmosphere without any familiar face, these poor souls have to sell themselves each night to have meals to eat. The young kids who are seen facilitating on the busy bus stand, cleaning buses and selling food in the daylight – as soon as the sun goes out, are helplessly used for satisfying personal lust.

Watch the Full Documentary Below: 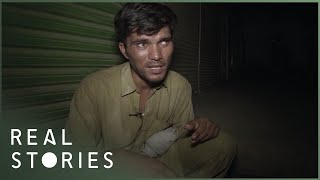 In a modern day Pakistan, where purest of Islam is being followed, harsh punishment is written in their law book but some of the behaviors forbidden by Qua-ran and humanity is still publicly practiced in the name of pleasure and influence of money. What Happens Behind The Standing Buses? Poverty, jo

Psychologists have linked the audience with long-term grave impacts on one’s personal lives. Such victims even if they manage to escape in some part of life suffer from anxiety, panic attacks, sleeping problems, fear, irritability and display of sudden reaction or outburst of anger to being touched. Unfortunately, not only hiding behind the standing buses of Pirwadhai but it’s depressing enough that the set locality has a police station and check-posts near as well that have simply turned a blind eye to what goes on here.

Not only these cruel men, who’ll lure these boys with false hopes and promises of a better future but in fact the authorities that have silenced the cries of these desperate for help children and our societal attitude as a whole is equally guilty.

The issue did gain some limelight after director Muhammad Naqvi and British producer Jamie Doran’s filmed Pakistan’s Hidden Shame spoke about the society living in denial, but then we again pushed ourselves in the darkness of insensitivity and delusion.

Set mainly in Peshawar, the documentary recorded responses of the victims as well as the abusers following bone-chilling confessions. It opens avenues of discussion that why the shameful practice still goes on in the society while rather than doing something, we are still in denial.

What are your views on this? Share with us in the comments bar below.