James to be England first choice

“The good thing is that I feel as we are improving and it has been quite intense in training. We have been training very hard.

“The manager, with the attention to detail that he shows, will go through everything. You can rest assured he won’t leave any stone unturned.

“Once we go to South Africa, we know we will be fully prepared. With a little bit of luck, and with everyone fit, we will have as good a chance as anybody

“We need to improve on the last few games but, when everyone is fit, we will go for it.” 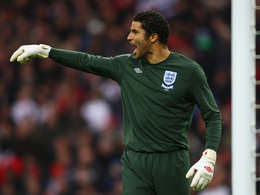 Lampard is pleased to see his Chelsea team-mate Joe cole secure his place in the final 23 after Capello trimmed the squad down from his initial 30 on Tuesday.

Cole made sure of his place after an impressive performance as a substitute against Japan after a telling contribution to the final part of the campaign at Stamford Bridge.

Lampard said: “It has been difficult for Joe. You want to get into the team and then take your chance to impress the manager.

“I thought Joe was awesome against Japan. He made a big impact and he’s made the squad.”

Lampard’s ability to score goals from midfield will be a crucial factor if England are to succeed and he is upbeat about his fitness.

He said: “I am fine. I just got a kick on the calf against Japan. I was going for a header and then I got a little bit of cramp in it.

“But it is nothing to worry about. The main thing is we got through that game with no injury concerns.”

We can see the player on this jersey at ground