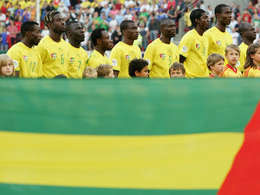 Bahrain won the friendly 3-0 but they were surprised by the poor quality of the Togolese team with head coach Josef Hickersberger describing the match in Riffa on September 7 as “boring” and “a wasted opportunity”.

However, it appears Bahrain’s opponents were not an official Togo team.

Togo sports minister Christophe Chao told Jeune Afrique: “Nobody has ever been informed of such a game. We will conduct investigations to uncover all those involved in this case.”

According to the Gulf Daily News, BFA vice-president Shaikh Ali bin Khalifa Al Khalifa confirmed Bahrain went through all the correct channels in organising the match.

Shaikh Ali added all the paperwork received before the friendly were officially signed and stamped from the Togolese Football Federation.

The publication went on to report a letter listed a 20-member Togo team, including each player’s passport number and date of birth.

However, a completely different list of 18 players was provided by a team official a few minutes before the start of the match.

The Bahrain Football Association (BFA) said it had been arranged under all the usual official procedures and through an agent they had known for several years.