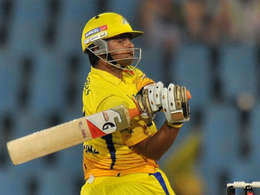 Dhoni praises Raina and Vijay MS Dhoni heaped praise on Suresh Raina and Murali Vijay for setting the platform for the comfortable 97-run victory over Wayamba.Raina (87 off 44) and Vijay (68 off 48) shared a 137-run second wicket partnership, that came off just 72 deliveries, to help Chennai post a mammoth 200 for three and set the tone for the convincing win at the SuperSport Park

“We did not want to bat first because in this ground it is very hard to defend. But once we were sent into bat, we needed couple of extra runs, something over 180.

“And exactly that’s what the batsmen did. They started off cautiously and after that Suresh Raina and Murali Vijay batted brilliantly. They were easily picking up boundaries and in the end 200 is a very good score to defend,” Dhoni said after his side had inched a step closer towards semi-finals following their second consecutive win in Group A.

“We want to win each and every game that we play. But we always talk about not to think too much about the result, instead prepare well for the game. It is really important to prepare well and execute your plans on the field,” he said.

“It is important to have a quick bowler in the side.

Dougie (Bollinger) came in as a replacement for us and all of a sudden the team looked different with his inclusion because pace really matters,” Dhoni said.

“Equally important was Albie Morkel’s spell because he has got the neck of picking wickets,” he added.

His Wayamba counterpart Jehan Mubarak was of the view that his bowlers awful performance in the middle overs cost his side the match.