We might think women are unsafe out of home, they are unsafe it they go out for work or market, we might also think they are unsafe with other people in the neighborhood but this episode of Satyamev Jayate reveals that women are safer out from home than inside their own home. Watch this video and find out some of the eye tearing stories that revealed through the television channel in India. 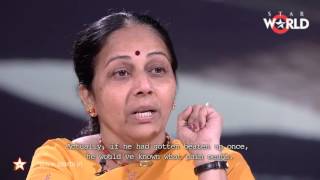 We might think women are unsafe out of home, they are unsafe it they go out for work or market, we might also think they are unsafe with other people in the neighborhood but this episode of Satyamev Jayate reveals that women are safer out from home than inside their own home. Watch this video and fi

Satyameva Jayate (English: Truth Alone Triumphs) is an Indian television talk show that airs on various channels within Star Network along with Doordarshan’s DD National. The first season of the show premiered on May 6, 2012 and marked the television debut of popular Bollywood actor and filmmaker Aamir Khan. While Hindi is the primary language of the show, it is also dubbed and simulcast in other Indian languages such as Bengali, Malayalam, Marathi, Tamil and Telugu.

Satyamev Jayate is the first show ever in the history of Indian Television to be aired simultaneously on a private channel network STAR and a national broadcaster Doordarshan. The show is also dubbed in several languages including three southern Indian languages viz., Malayalam, Tamil and Telugu, along with Bengali and Marathi. Apart from Star Plus, the show will also have simulcast on STAR World (with English Subtitles), STAR Utsav, STAR Pravah, STAR Jalsha, Asianet and STAR Vijay within the STAR Network and other channels including DD National and Eenadu TV. Besides India the show also aired in over 100 countries around the world. On the broadcast of the show, Khan commented, “This show is being launched on a large scale. I had to make complete use of this medium. This is a baby step in that direction.”

The show was also dubbed into Kannada, but was however not broadcast in the language, due to an unconstitutional, self-imposed and self-enforced ban by the Kannada Film Industry, which does not allow a dubbed version of any serial or movie to telecast in the state. The Kannada Film Industry, however, does approve Kannada remakes of the same. After the first episode went on air, Shiv Sena chief Bal Thackeray requested the Karnataka government to allow the show to be aired. On the issue, Thackeray commented that “This show must not be tied up in parochial chains or barred from the public. This is our view.” Khan also requested Karnataka Film Chamber of Commerce to allow the show to be aired in Karnataka. However, the first episode in Kannada was later released into show’s official site.

The show telecasts on Sundays at 11 am IST. While the producers were high on showcasing it in the prime time at 9 pm, Khan wanted to telecast it on Sunday mornings since the slot is commonly considered as “family TV viewing” in Indian Television, after popular TV shows Mahabharata and Ramayana were aired on Sunday mornings and were highly successful. He was reported saying, “I wanted to telecast my show on Sunday morning. I want each family to watch the show and connect with it. We have watched Ramayana and Mahabarata and it used to come on Sunday morning. The shows created a different atmosphere.”[10] He further added that, “I don’t understand TRPs and GRPs. I have no idea how to calculate it! I don’t care about it. It is important to reach out to the Indian audiences. If viewers want to see, they will see or else it is up to them.”

Editor’s Note: Satyamev Jayate is a copyrighted program of Star Tv Network and Amir Khan Productions, We are just embedding from the source that they have uploaded videos from and are not associated with the team of Satyamev Jayate. We share it to aware people around the world to know the hidden facts and reality that was never revealed in a society like ours. We don’t bare any responsibility if this show has caused any individual or organization which is sole decision of Satyamev Jayate to broadcast this program worldwide through Television networks. Thank you for watching.