Barcelona coach Pep Guardiola claims his side will struggle to play better than in their 5-1 win over Panathinaikos.

Having lost 2-0 at home to promoted side Hercules in the Primera Division on Saturday, Barca were back to their brilliant best against the Greek champions. 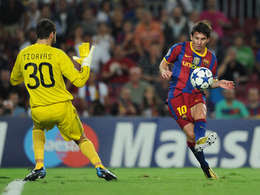 David Villa scored Barca’s other goal – his first for the Catalan club in the Champions League – on a happy night at the Nou Camp.

And Guardiola, who saw his side go behind after 20 minutes, was delighted.

“It’s difficult to play as well as we did today,” he said after the match.

“It was an extraordinary game and we gave a great image of ourselves- that’s the way we have to play.”

The Barca coach admits it was important to react after Saturday’s defeat against Hercules.

“Sometimes you can lose because people are tired, the rival is good or they have a good coach, but the important thing is to know how to lift yourself up, to know that you can do better,” he said.

Meanwhile, Panathinaikos coach Nikos Nioplias says the result has little bearing on his side’s hopes of reaching the last 16 of the Champions League.

“Our aim is to get to the next round. Losing here is not a problem. We need to do well against FC Copenhagen and Rubin Kazan,” he said.

“When the group finishes on December 7 we’ll see where we are.”