Modernization and global hunger of new innovative technology, and vast possibility of adaptation to the human life, we may be working like a robot one day as people are seeking different tools to help making our life easier and lazier day by day.

What do you think about replacing expensive doctor’s fee and lab testing services which can be done by a  smart phone in your pocket? Have you ever imagined? here is a story of the same kind.

Cardiologist Dr Eric Topol is a practitioner of the future of medical consultation – equipped with a smartphone and some sensors. One of his patients – Bill Sousa – has recently had heart surgery and Dr Topol is showing him how they can remotely monitor his recovery. The doctor has one sensor that check the rhythm of his heart and another that clips over the tip of his finger to determine the oxygen level in his blood stream. 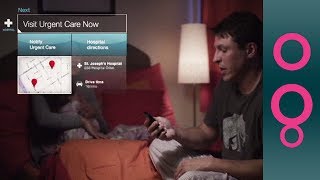 Can a smartphone replace your doctor?

Modernization and global hunger of new innovative technology, and vast possibility of adaptation to the human life, we may be working like a robot one day as people are seeking different tools to help making our life easier and lazier day by day. What do you think about replacing expensive doctor's

The sensors connect to a smart phone and a specialized app sends the results to the cardiologist’s office. Dr Topol explained: “Instead of having it [the equipment] at a hospital for $3,000 – that’s what it costs, or more, in some places it’s up to $7,000 – you would just use your phone with this app.”

He has developed several of these phone apps himself, convinced they are about to revolutionise medicine itself. Dr Topol says he is now prescribing more smartphone apps than drugs so he can easily follow his patients’ progress from a distance. For patients like Bill Sousa, who lives more than an hour’s drive away from the hospital, linking up to a tablet allows him to check his blood pressure twice a day.

He is delighted with how easy it is: “It [the app] automatically sends it [the data] to my doctor, on a weekly basis. So, that’s all I have to do.” The device is a real money saver in the US, where medical treatment costs more than anywhere else in the world.. Dr Topol and his apps are part of a trend.

Soterra Wireless, a San Diego based company, has developed a portable monitoring which is already being tested in a number of hospitals. Soterra’s Garry Manning explained how it works: “It’s able to show all of the vital signs of the patient: his heart rate, blood pressure, breathing rate, saturation of oxygen, skin temperature…” And the patient’s doctor is able to follow-up in real time, via a smart phone, even if the person being monitored is on the other side of the world.

Manning said the device can speed up the process and help diagnosis: “Now, they get that information immediately, so they can make very quick decisions. Eventually, we of course, as other companies may do, will be able to take that information and be able to start to predict the patient’s deterioration, ahead of time.” The ultimate goal is to be able to predict someone’s medical future.

Dr Topol believes that soon we will be able to detect diseases with sensors placed on or under our skin: “Someday, maybe five years from now, we will have tiny nano-sensors in the blood. They could detect cancer showing up for the first time in the blood.”

What if in the future those devices could replace doctors – diagnosing and anticipating? Imagine your son has a rash. A small device identifies it, says it is benign and advises some rest. Or your daughter doesn’t feel well. A sensor takes her body temperature, and analyses a urine sample.

This time the app recommends a visit to the hospital as soon as possible and give you directions to the nearest one. It is not science-fiction, but something which can become a reality very soon.